Hey guys, how are you doing? I hope the week is not being too shabby on my favourite people? 💕

Have you watched Ebonylife studio’s latest offering on Netflix? I have and I’ve got some things to share about it.

You ready? Then let’s go…

Blood Sisters is a four-part crime thriller directed by Biyi Bandele and Kenneth Gyang. Set in Lagos, ‘The series follows a Nigerian wedding where the bride’s friend accidentally kills the groom the night before their big day. The show tackles themes of intra-family relationships, physical and substance abuse, love, commitment and relationships.

Supporting them are a number of other actors and entertainers with notable appearances from Joke Silva, Toyin Abraham, Zach Orji and Bimbo Manuel.

The series was a gripping one. The directors were successful in keeping the viewers engaged from the beginning to the end. Very impressive storytelling. The directors brought out the best in their actors. Most of the actors interpreted their roles perfectly. I’ll talk more about my favourites later on.

I liked the display of culture, scenery, landscape and Lagos skyline in the show. The soundtrack and score were also very good. This is not surprising as Ebonylife Studios tends to do very well with this – even with their not so good movies.

The fight scenes were actually believable, kudos to the directors for this. I hope our action man – Mr Ayo Makun was taking notes. 🏃🏾‍♀️

What a tale! I’ve read and heard of the most ridiculous dysfunctionality in families but the Ademola family – led by their matriarch – takes the crown. At some point, I was sure Kunle and Timeyin were either adopted or her late husband’s love children because her hostility towards them was unsettling. She even transferred the feeling to an innocent child (her grandchild)!

Now the murder! Where do I start with this? Did Kemi shout for help to finally expose Kola for the monster that he is? No. Did she pick up the gun in panic and shoot aimlessly to scare him off? No. She shot him. Okay, that’s still possible right. What about the decisions she took afterwards? Sister, you ‘IS‘ a psychopath, a sleeper psychopath 😁. She just needed something to trigger her.

I thought they’ll be a little backstory to why Kemi was so hardened, babe just kept going, no breakdown at the catastrophic trail following them.

It doesn’t seem likely that the girls could have murdered the groom and gone on with the wedding like nothing happened as they did in the show. How can a timid character like Sarah go on dancing into the hall as she did! Didn’t anyone even hear the gunshot?

Then the aftermath. Didn’t the cleaners notice the missing bed linens and towels, and the kitchen staff didn’t notice missing utensils? How did they move around the hotel so smoothly? Just too many questions.

I noticed a few hiccups with continuity. One that quickly comes to mind is the fight scene involving Timehin and a housemate in the rehab facility. The directors actually want us to believe that the girls were fighting from when Kate Henshaw landed in Abuja, visited the IG, went back to the airport and returned to Lagos! Make it make sense guys.

How can we unwrite the blackmailing journalist, he seemed like an afterthought. There was no background as to why he was there and no mention of his death. I understand that a high number of killings in Nigeria are not investigated, but this is tv, not referencing it at all made that part of the story a bit disjointed.

The carjacking scene too was unnecessary as was the organ harvesting doctor. The movie was trying to fit in too many side plots, some not really plausible.

The cast – My favourite part 🤸🏾‍♀️

I can’t even fault the casting director, the selection was fabulous. The chemistry between them was good to see.

I’ll start with Ini and Nancy. My goodness did those girls give their all or what! They both did an amazing job. Expression is key in acting and both roles required a lot of different emotions and facial expressions. They both nailed it, they did really well.

Uduak with the looks 😁. Looking like she had a fart trapped in her buttocks. She must have smiled only once throughout the movie. Ahn ahn, is anyone really like that, just miserable all the time! Kate nailed her role though.

Her stoic demeanor throughout the show was admirable. Her reaction when she was told of Kola’s death is awards-worthy, Kate Henshaw did well, there was no unnecessary theatrics or melodrama, she gave us the right doze of steel.

Timeyin had us at hello! Babe took control from her introduction at the rehearsal dinner. Genoveva came to prove a point. Point taken Genoveva. A new star is born and we are in awe. I’m looking forward to seeing more of this tiny spitfire.

Uncle B of life 😁. That was actually a very good character – most big families have ‘fixers’. Ramsey’s interpretation of this was rather humorous starting with his facial expression. Our Ray Donovan wanna be 😛.

I was actually waiting for him to turn into a machine or something (terminator style), cause nothing was stopping bros o, bad guy ever liveth. The role was good for him, it shows he’s a versatile actor.

It’s amazing how our dear uncle B went to get treatment for his burns and in all of that forgot to clean his face, the dirty face was very unnecessary, especially for his clean smooth operator image 😁. I did enjoy this character.

Wale Ojo, our dear Chicago, I’m a fan Sir. I enjoyed his role very much as I did Segun Arinze’s role as DPO. Frankly, the entire police force were convincing. A sad reality of what obtains within the Nigerian Police.

Chicago reminds me of those returnee uncles that will let everyone know they lived abroad, uncle London or uncle Atlanta. 😀, very Good character.

Segun Arinze was so believable as the DPO who had a conscience but ehn (his hands are tied 😂).

The anatomy of a deranged couple. I’ll call these two freaky-freaky, because, why? Any small thing they’re – ‘offing’ their clothes’ (stripping) 😊. These two were amazing in their delivery. They portrayed a conniving couple so well.

Uche was quite disappointing in this role. She wasn’t sure if she should be comedic or serious. Her character was a little confusing. Her performance was flat for me.

Keppy Ekpeyong on the other hand did quite well.

Etim Effiong the spectacular. Guy can act, please, another one on my list of favourite characters in this series.

Deyemi Okanlawon was also amazing as Kola the badass. They had an easy flow between them and both owned their scenes.

A little statement about Kola having a black belt or some sort of training would have been handy in explaining how he disarmed an assassin without any tear though, but that’s on the directors not him.

Blade, the worst assassin in history. How can an assassin be so obvious and so incompetent! Sticking out like a sore thumb yet so useless😂😂.

If all brawn and no brain was a person! Not his fault though, this one is also on the director. He did what he was told to do and he did it well.

Tope Tedela was good as the evil doctor. Still can’t wrap my head around how the girls fell into that trap though, After all they’d been through! 🤷🏾‍♀️

Ibrahim Suleiman was so sweet as Kenny the lover boy, he even gave his life for love. He did well even though I felt like pulling him aside and talking sense into him. Babe left you for a rich guy, you still held on to her till you lost your life. Sad end to a good character.

Toke Makinde actually delivered her best performance to date. The problem is, ‘Sis is no actress’. Her acting in the part she told Etim Effiong to talk to Princess was so bad it was hilarious. She did try though, seeing the slight improvement in this one, perhaps she could actually become the actress she wants to be with more training, I respect her determination.

I think she even did better than Wofai fada as Princess. Wofai’s performance wasn’t impressive at all! It’s quite surprising because I’ve seen her in other movies and she was okay.

The make-up was not impressive . The bride’s hair and make-up in the first episode didn’t do it for me. I was so distracted by her lace wig and makeup, everyone looking golden 😅. The make-up on Kate was just too dark. We understand she was portraying a dark character, but whoever drew that ‘lead’ on her brow did not try at all. The foundation used on most of the ladies was not good for the camera. It was a mess.

Now the costume. Most of it was good, my problem was Kate Henshaw’s over the top outfits. They looked so stiff and uncomfortable, who dresses in a voluminous outfit just to receive guests at home or elaborate capes for dinner! Especially after losing a son who was her everything!

Then again, when you watch shows like Real Housewives of Lagos or see how some of the Nigerian celebrities dress, it seems plausible that people will actually dress like that.

I wish they’d gone a different route though. I get that they were trying to portray a powerful woman, what they came up with was just extravagant and silly.

The bulky costume earrings in almost every scene 😤. They looked cheap and tacky, not good for the powerful image being portrayed.

Oh, I almost forgot Gabriel’s ill-fitting suits! Did he gain some weight after the outfits had been made! 😁. I liked Nancy’s outfits though and Timehin’s was not bad.

I rook a few valuable lessons from the show.

Let’s wrap this up.

A round of applause for the cast and crew of Blood Sisters. It’s great to see a massive improvement from Ebontlife’s last outing. The improvement in our storytelling and movie production is laudable and I believe it’ll keep getting better. I look forward to seeing Nollywood on top. I’ll give this a 6/10.

Please leave your comments, I really want to hear your opinion about the show.

Similar: Man Of God – A story of redemption 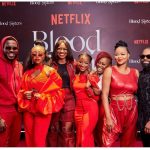